You are here: Home / Travel & Cities / The Opal Coast in France ~ an unknown treasure

Let’s go exploring together again, shall we?  Today we are going to visit France. A beautiful, yet lesser known part of France that we recently discovered on a Spring vacation with the camper van. Let’s go to the Opal Coast in the North of France. 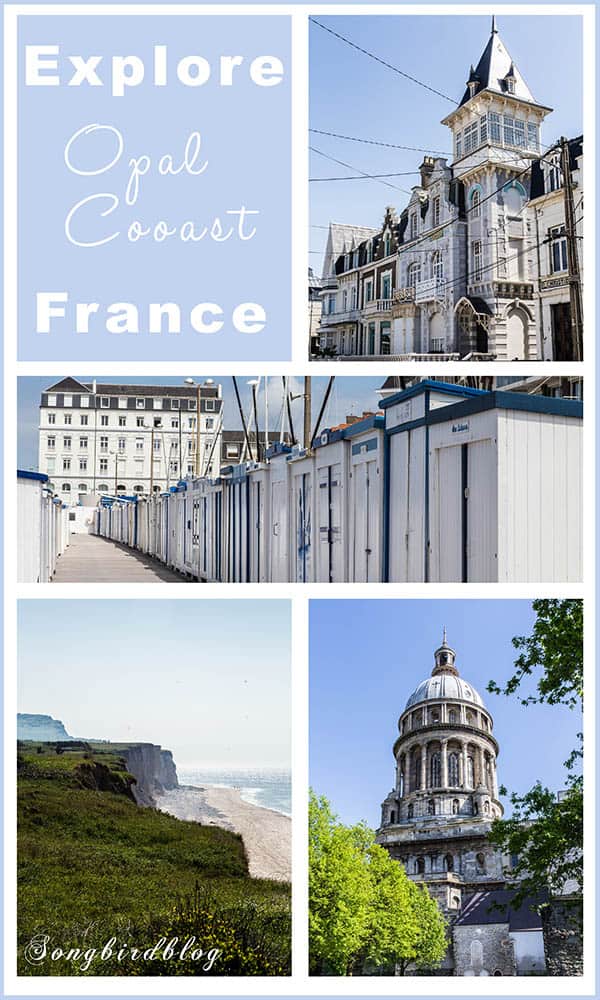 The Opal Coast is at the most northern part of France, right there where the Channel is at its narrowest. The ferries to and from England sail across the divide here and underneath the trains hurry through the tunnel. We found a lovely camper site where we stood at place nr 1. When we opened the back doors of the van we could watch the sun set over England straight from our bed. The Opal Coast was quite the surprise for us, only a 3 hour ride from where we live, but totally unknown. Well no longer, it was beautiful and we had so much fun we are guaranteed to return. 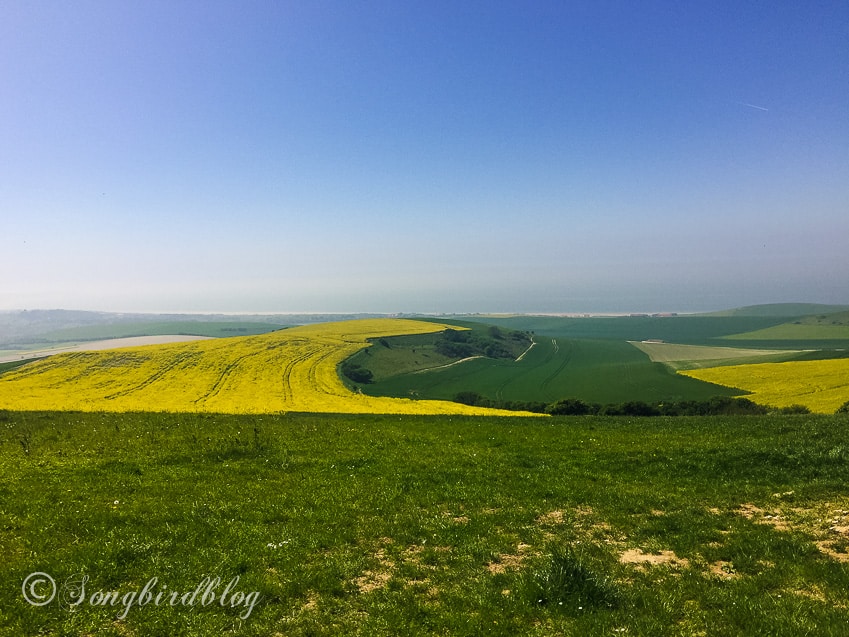 When you drive up to the coast via Calais, it is a boring route. Flat as a pancake, lots of industrial zones and not much to see. And then suddenly you turn a corner, the landscape opens up, there are lovely hills everywhere and in the distance you see the sea glisten. It is a breath taking change in scenery. The hinterland of the Opal Coast is mostly agricultural in between nature reserves and scattered little French country villages. 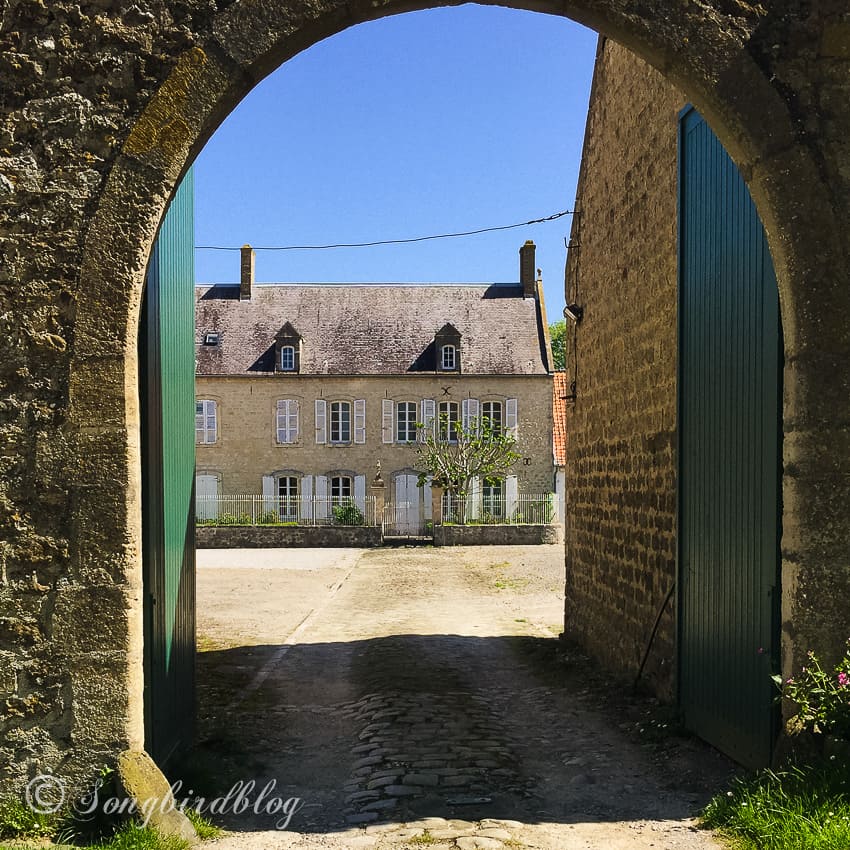 It is a fun area to explore but prepare to hit the breaks hard from time to time or you might miss little gems like this. We scouted the area both from our bikes as well as with the van and it was so much fun. From the higher up points the view was always stunning.

We were especially lucky because we were right there at the golden spot when the rapeseed fields were flowering. There were bright yellow patches everywhere and I never realized just how absolutely wonderful those flowers smell. Riding on my bike through those fields of yellow felt magical. 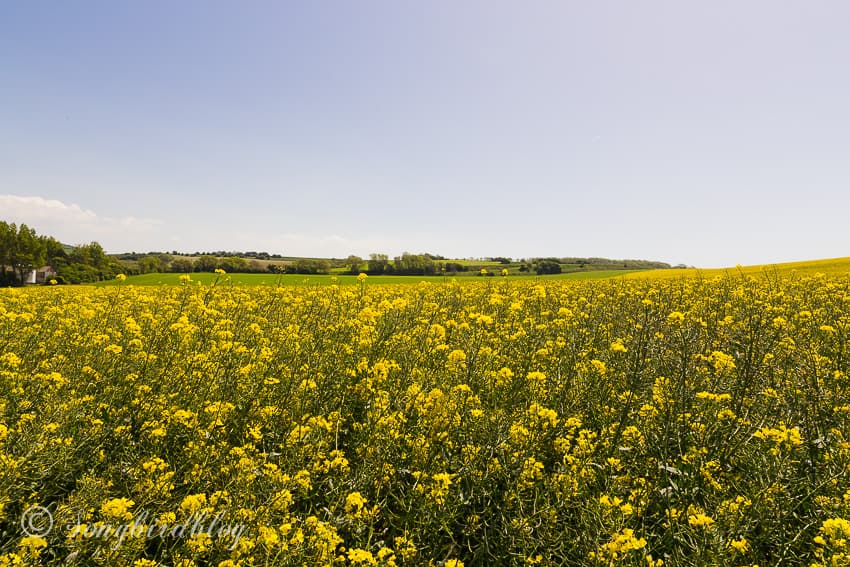 On top of the plateau there were the views of the meadows, fields, country roads and little villages on one side, but turn around and there was always the coastline. 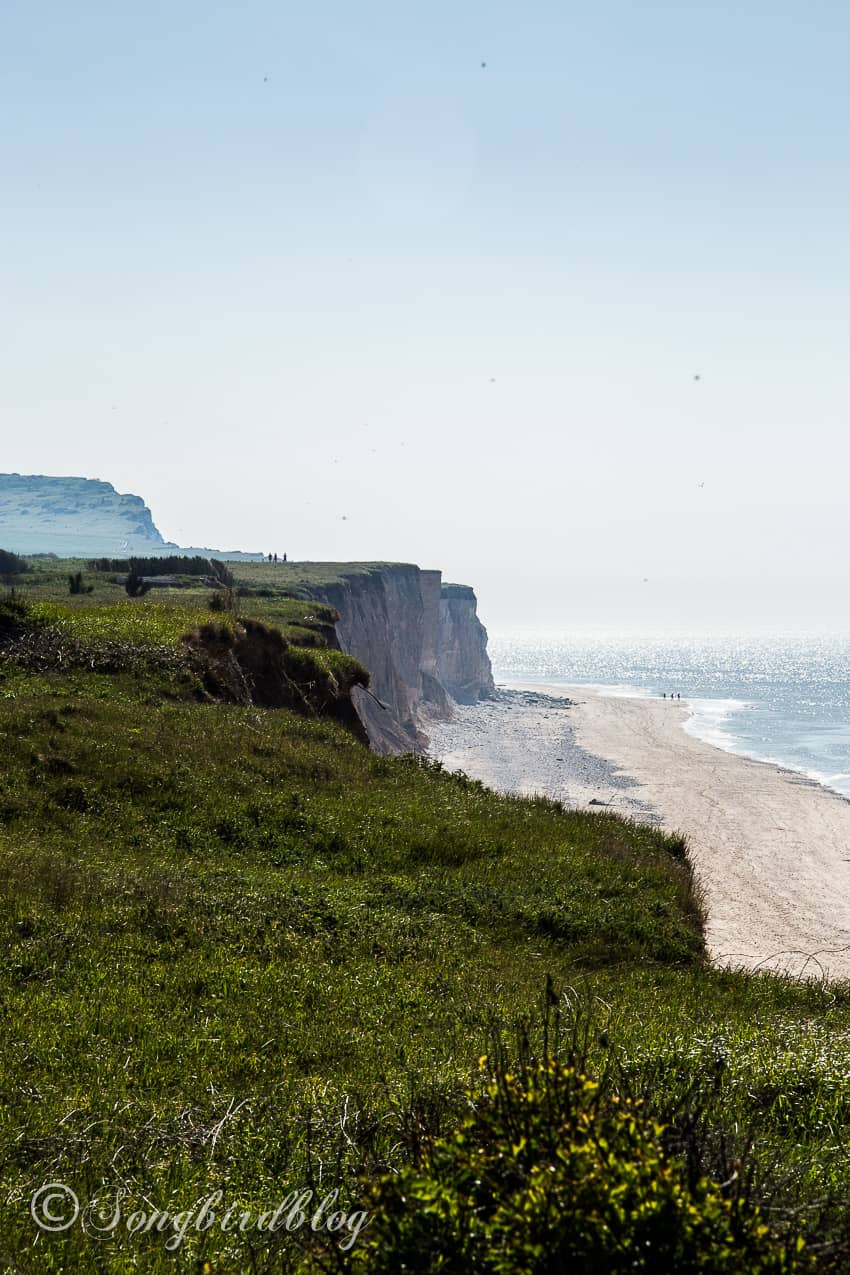 Just as on the other side of the Channel, the land falls steeply away to the shore line. It gives you dramatic views of the cliffs and a feeling you could literally fall of the earth here. But at the bottom there are beautiful beaches that are quite large at ebb tide. 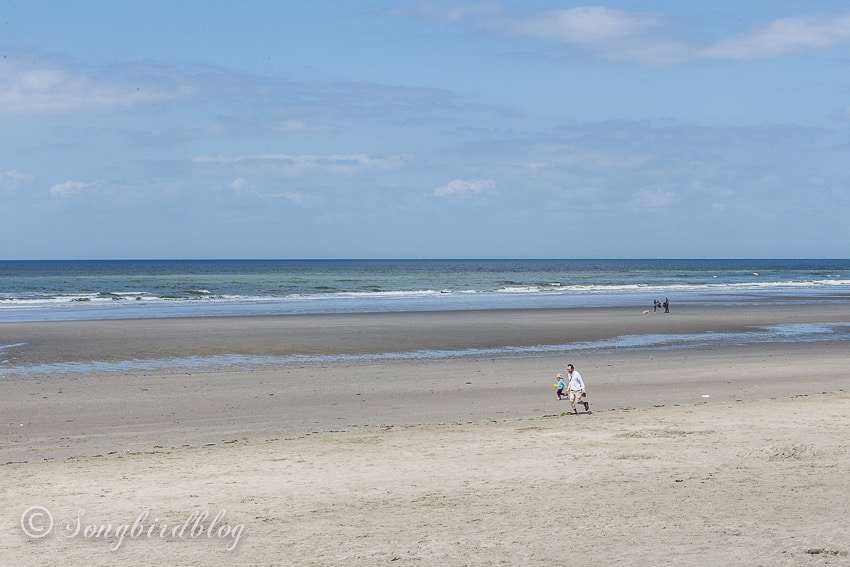 Of course with beaches come beach towns and the French do those very well. Among others we visited Wimereux, where the beach cabins were so quaint and beautiful I think I took at least 50 pictures of those alone. 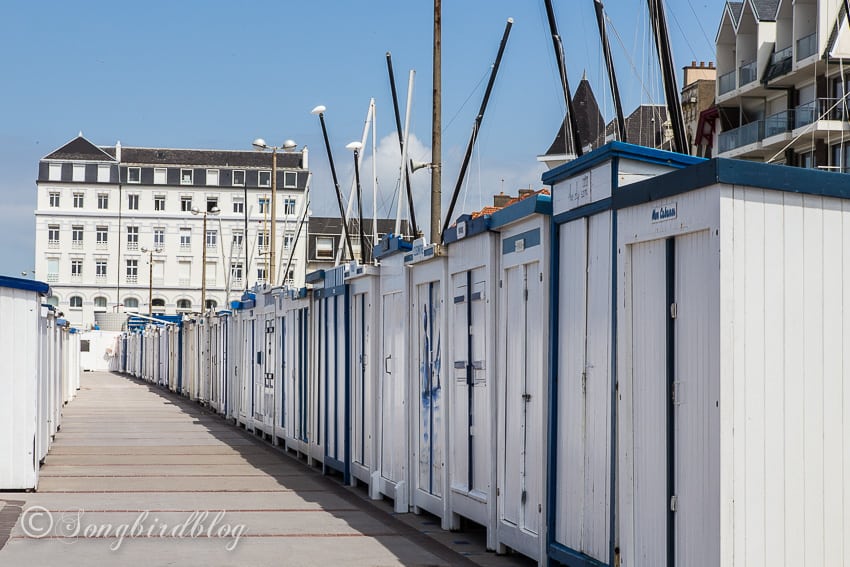 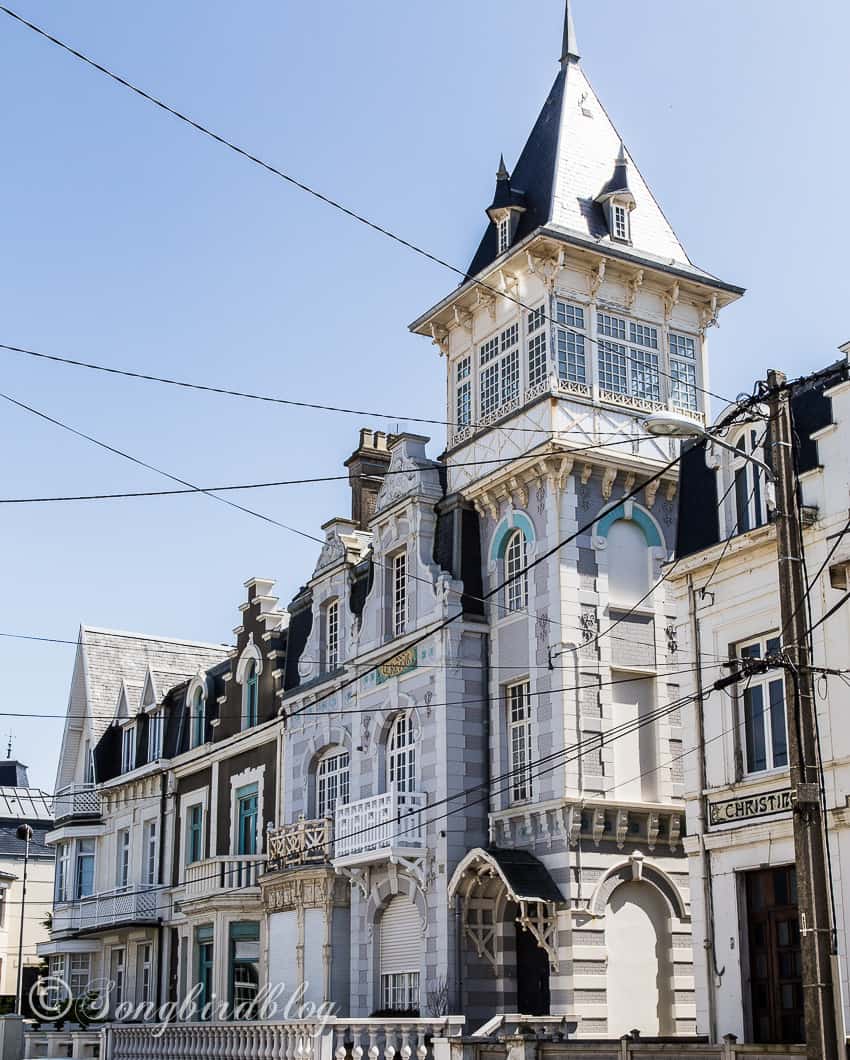 Most villages I saw were a mixed bunch. You’d typically find perfectly kept beautiful mansions right next to falling apart, rickety old houses with peeling paint and garbage bags in the front yard. But it works. I’ve written it before, but the French do peeling paint and rusting fences very well. Maybe it is the pastel colors, the limestone colored houses, the blue sky and the smell of sea salt in the air, but neglected and rundown becomes vintage and rustic under the French sky.

In Boulogne, the largest city in the area, we spent most of the time exploring the Medieval upper part of the town. Surrounded by a large wall, there is a little village that looks like not much time has gone by since they built a cathedral, belfry (formerly the dungeon) and a castle in between narrow little streets and market squares. 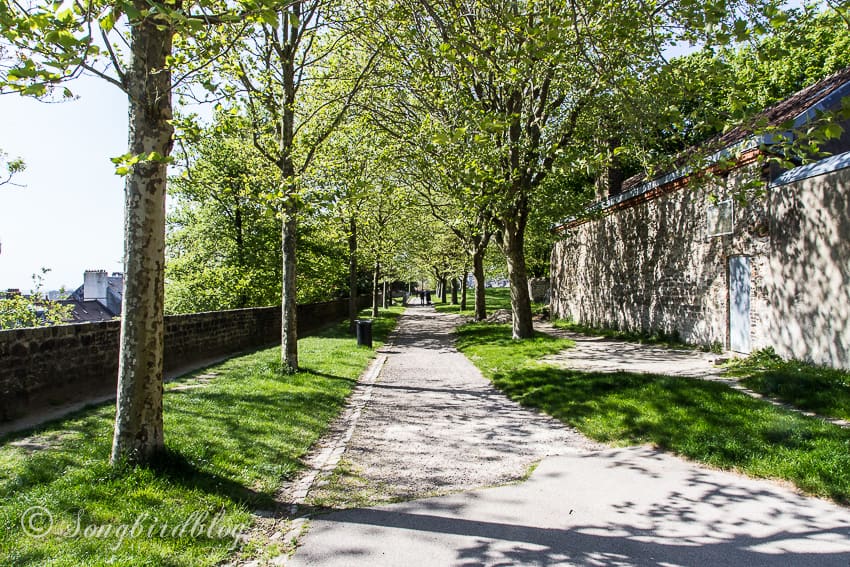 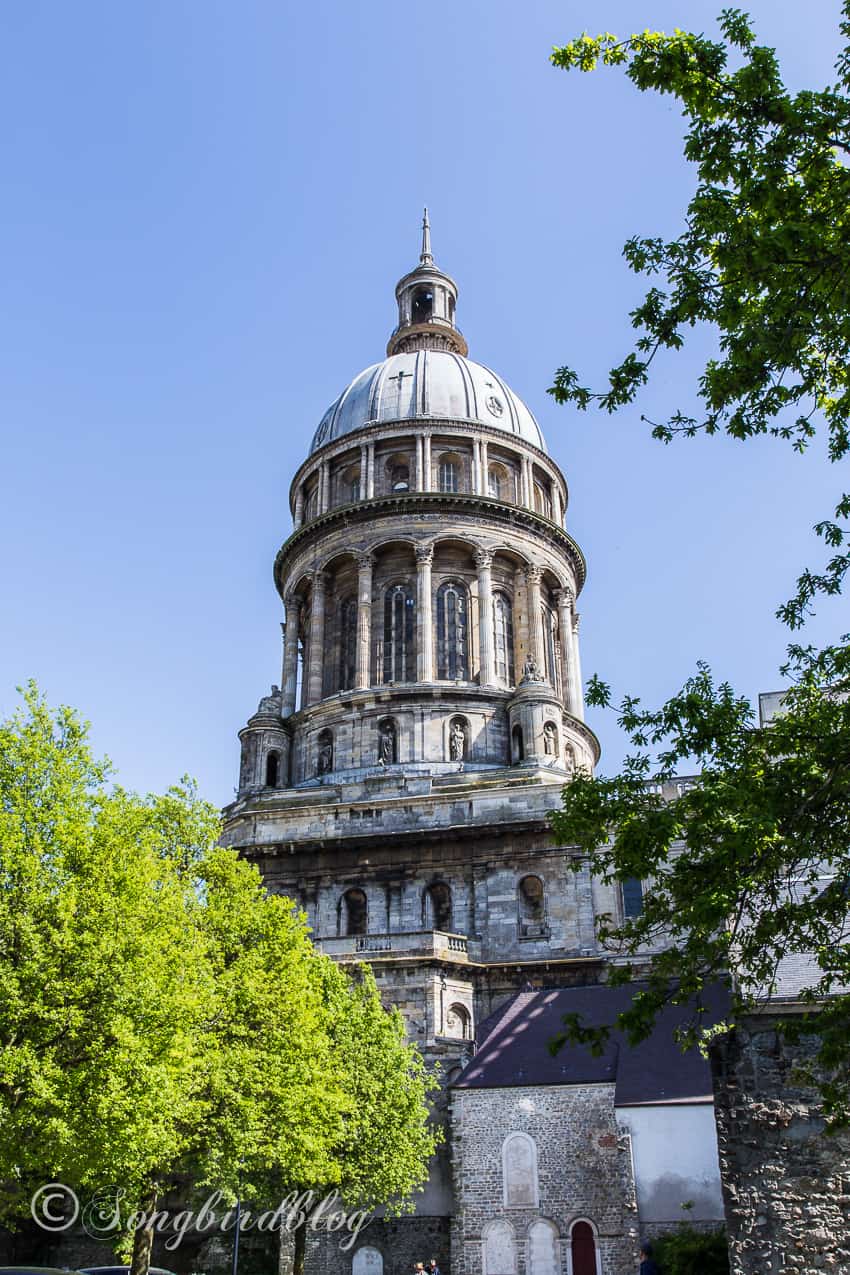 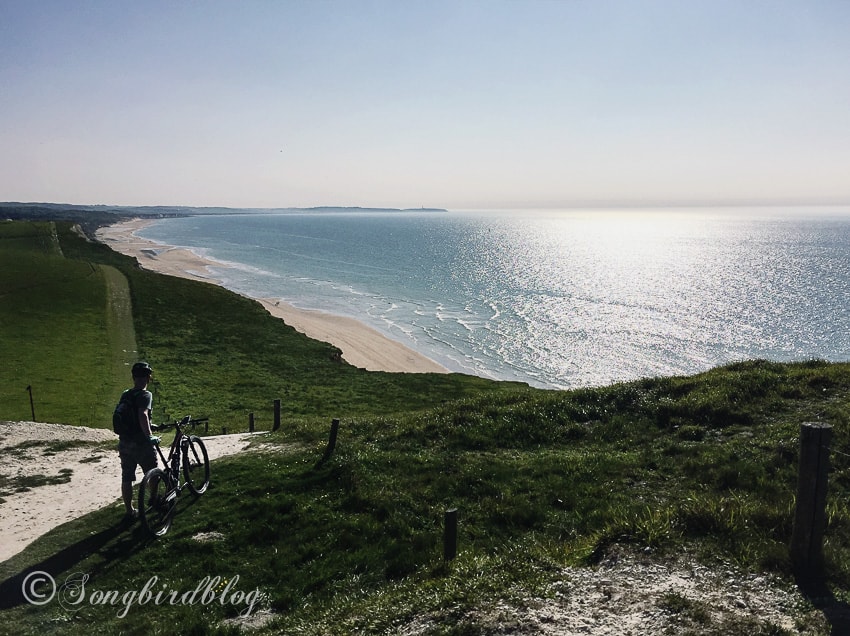 The Opal Coast has activities for every generation and for every type of tourist. If you are less mobile you can explore the countryside by car and go hunting at the flea markets or famers markets in the villages. There are countless museums about both of the great wars you can visit. Or dive into the history of the area that dates back to the Vikings and the Romans. Of course there is always the option to just sit, watch the crowds and eat delicious (sea)food at a terrace overlooking the channel.

If you want to give yourself a bit more of a physical workout, you can work up a sweat in numerous ways. We did most of our exploring on a mountainbike. It was my first experience cycling up hills for real, and although I have always stated (rather explicitly and loudly) that I was not made for cycling up a hill, I enjoyed it. But then again after working so very hard there was always a stunning view as a reward (and a bit of downhill excitement later).

If cycling is not your thing (I totally understand), the area is also perfect for hiking. On the beaches you can buggy sail, paraglide, do windsurfing or go swimming of course. We were pleasantly surprised about all the Opal Coast in France had to offer. We spent our time well and saw and did a lot, but I feel there is much more to see, do and explore there. So we will be back.

Hope you liked coming along to France…..

Where shall we go next?

This site uses Akismet to reduce spam. Learn how your comment data is processed.