You are here: Home / Archives for Europe

The romantic city of Strasbourg in France was the biggest surprise of my summer holiday. It is a stunning, old city with beautiful squares, colorful houses, loads of bridges with the most amazing flower boxes, cobbled streets, a truly impressive cathedral, good food, very bike friendly and so romantic!

Now granted I was head over heels in love when I visited Strasbourg so romance was definitely in my system at the time, but Strasbourg managed to make me fall in love with the city itself too.

END_OF_DOCUMENT_TOKEN_TO_BE_REPLACED Today’s road trip takes us on a visit to Esche sur Sure in Luxembourg.

By now you must have gathered that traveling and exploring has become quite a bit of a hobby of mine. And I love sharing that hobby with you. I always imagine us sitting around the kitchen table with tea and cookies and chatting about our latest adventures and sharing photos of trips and visits we made along the way. So let me take you back to Luxembourg for a nice day-trip, visiting one of the most charming villages I have discovered. END_OF_DOCUMENT_TOKEN_TO_BE_REPLACED 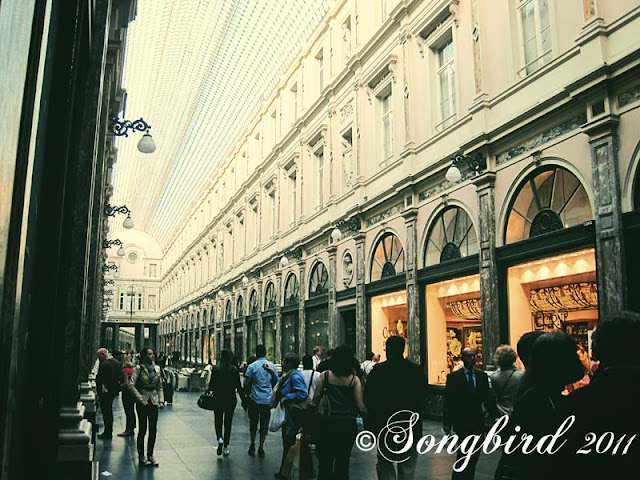 I promised you some pictures from Brussels and here they are.

Brussels is a lovely city. With two universities and countless other schools it is a young city. As it is the home of the council of the European Union it is a politically charged city, and since it is an old city that thrived in the golden age it is a majestic historical city.

Great place to go shopping in style. Except I didn’t have time for that. But I did have time to wander across the big market. 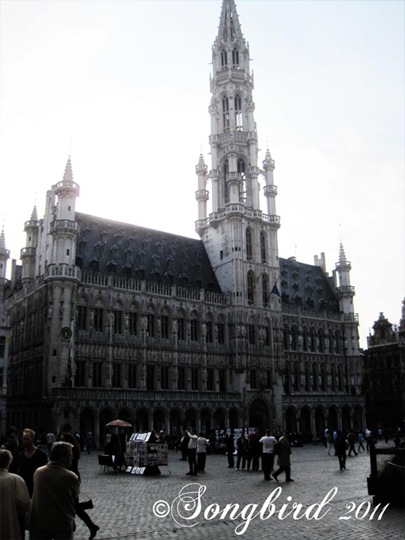 The big market isn’t so much big as in large, but more big as in grand. It is completely surrounded by the most gorgeous buildings you can imagine. Entering it from one of the narrow side streets and then being greeted by this sight, takes my breath away every time. 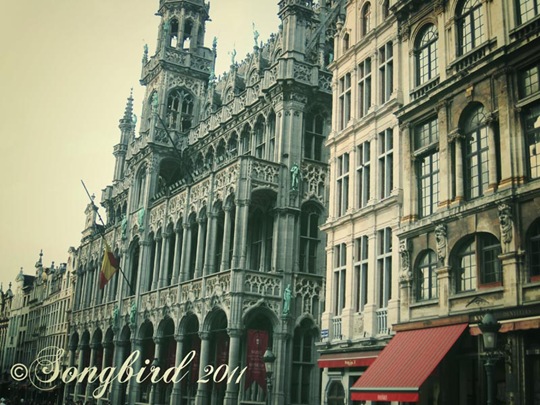 I took a little 360 degrees film here, but somehow my camera didn’t save it. I owe you on that one. 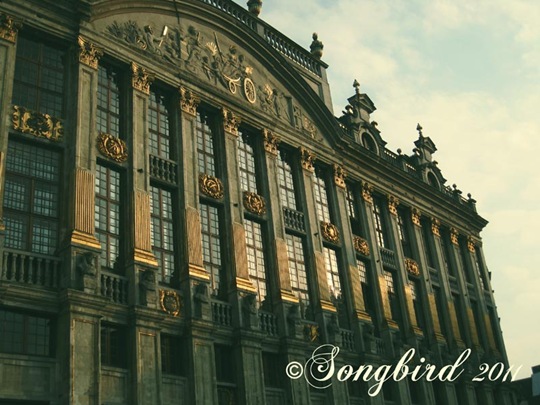 Most of the ornately decorated and gold plated mansions are former guild houses, the headquarters of various craftsmen so to speak.

They sure built themselves some pretty awesome ‘crib’. 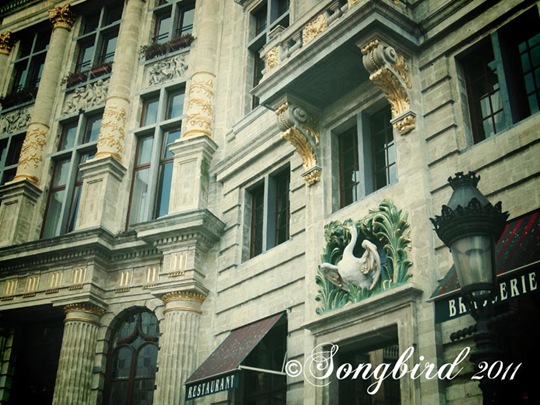 All that beauty brings a lot of tourists to Brussels. The camera happy crowd is everywhere. Like this group of bright and cheerful women (and yes, of course, I so did ask their permission to post their faces here on my blog…..). 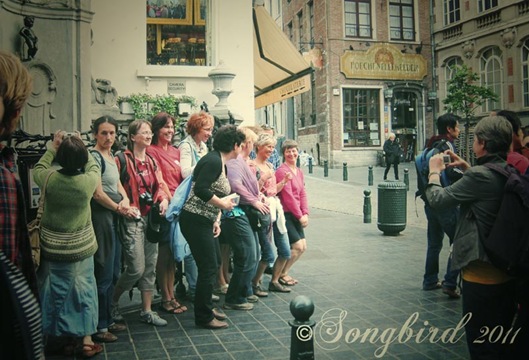 Want to see what they are all laughing at so hard. Look in the background. It is THE number one tourist attraction of Brussels (and if you are easily shocked you might have to look away for the next picture). 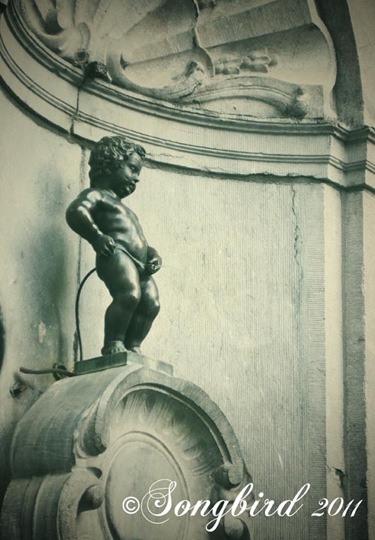 he teeny tiny, but insanely popular little statue of “Manneken Pis” which translated means Little Guy Pee. I am sure there is a story to this statue, I seem to remember something about a little child putting out a fire with you-know-what. There has been a statue like this in Brussels since before 1618 and it has been robbed many times. It also has a lot of different outfits, but as you can clearly see, I caught the little guy nekkid. (for more information in English check out this Wikipedia page).

Anyway, don’t ask me why, but after this we were thirsty. And Brussels is the right place to be with a good thirst. 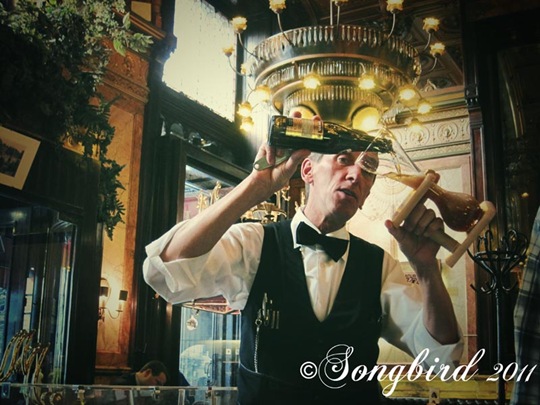 The Belgiums are very good at making beer. And serving it up in silly glasses.

This particular beer was not only served by a dashing waiter, but also in quite dashing surroundings.

Take a look at this: 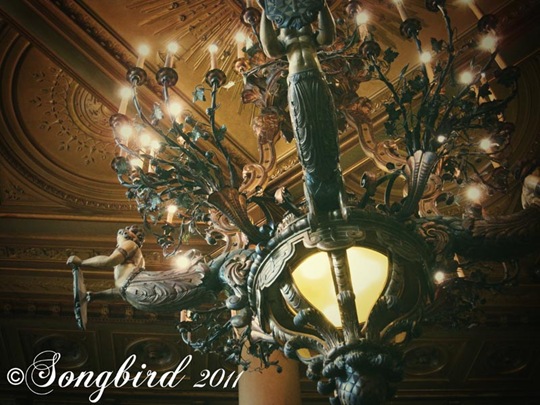 Quite the chandelier don’t you think.

And before you start to think it was all play and no work for me in Brussels I will include one very boring picture to proof to you that I really spent most of my time at the conference. 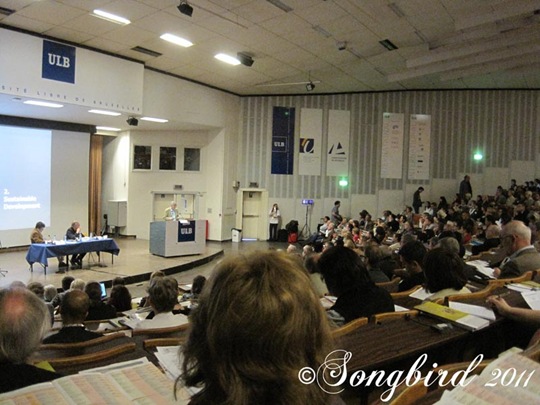 The conference venue was a lot less impressive than the rest of Brussels to say the least. But at least my presentation – that I gave with a very handsome Spanish colleague

Oh and I showed amazing constraint the whole time I was in Brussels. Because there was at least one of these on just about every corner….. 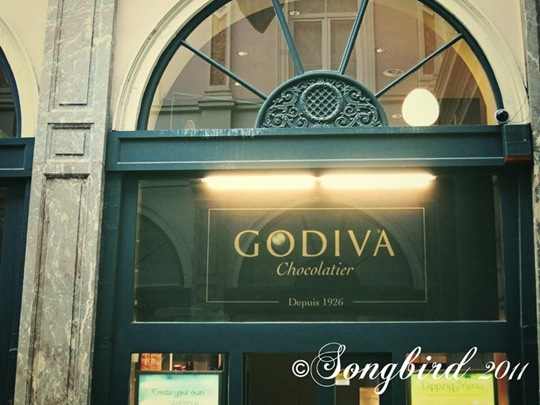 Most of the pictures in this post were post processed and vintagified with the Honey Retro action from the awesome and amazing The CoffeeShop Photography Blog.